Today, we venture outside and I want to show you how I made a simple DIY rock garden border for a flowerbed in our front yard. This is one of those projects I was able to do during my children’s nap time using supplies we already had on hand.

Since we moved in, I’ve disliked the brown border strip (Strip? Edging? What is that even called?) which surrounded our big oak tree. Sure, it kept the dirt in, but it was ugly and plain.

I have exactly zero expertise in building a retaining wall, but when we moved in, we found a big pile of rocks in our garden which the former owners had unceremoniously dumped there. Of course, the wheels of my mind began to turn. How hard could it be to make a DIY rock garden border?

I had experimented in the backyard with making a DIY rock garden border in front of a small flowerbed the year before, so I was ready to give it a try in the front.

I cleared away the grass and edged around the oak tree, then began to fit rocks together against the brown border strip. I left the border strip in place because the rocks by themselves wouldn’t be strong enough to hold back the dirt.

I found it was a lot of fun figuring out which rocks fit together, kind of like doing a puzzle. When I was finished, I was really pleased with the result.

Now, one big note on this: I did not secure the rocks in any way. There is no mortar, no adhesive or binder of any kind holding things in place. Soooo, that means if my husband accidentally hits them with the lawn mower, bad things happen.

However, seeing how it looks, we plan to make this permanent and secure the rocks in place. Until then, I don’t mind replacing a rock that falls down every now and then.

A few things I learned from this project:

I had been noodling on doing a DIY rock garden border for a LONG time, like basically since we moved in and I saw that pile of rocks in the backyard. It took me about an hour and a half to get this done. Why did I wait so long for a project with such low stakes (if I hated it, I could’ve just removed the rocks and scrapped the whole idea)?

Use What You Have

Turns out these rocks work great for a flowerbed border and they were just sitting in our yard. So, this little beautification project was completely free! In a similar vein, I also have a couple of decorative shelves in our living room made from reclaimed wood that was also lying around our backyard (what is it with stuff lying around our yard? Trust me, it’s not as messy as it sounds).

Don’t Wait Until Everything is Perfect

I knew if we liked how the rocks looked, we would need to figure out a way to secure them permanently in place at some point. However, I needed to just take the first step and figure out if it was going to look as beautiful as I hoped. Even though this project is technically only partially complete right now, nobody walking down the street would know that, and every time I look out the window and see the rocks, I smile. If I had waited until I had everything and could knock the entire project out from start to finish, I’d still be staring at that ugly brown border strip. Even if it means re-setting a few stones until we get things secured, it’s totally worth it.

So, how about you? Any little house or yard project you’ve been putting off that you need to just go ahead and knock out? Let me know in the comments! If it doesn’t work out, then at least you’ll know and you can move on to a different idea. For yard inspiration, I love looking at the Garden Answer YouTube channel.

I’m so glad I got this done. It motivates me to keep trying new things in the yard and seeing what works. That’s the only way to keep learning, right?

Pin it For Later

More From A Flourishing Place

5 Tips to Organize Your Pantry on a Budget

Previous Post: « How I Bullet Journal as a Stay-At-Home Mom
Next Post: Yes! You Can Declutter, Organize, and Decorate as a Busy Mom » 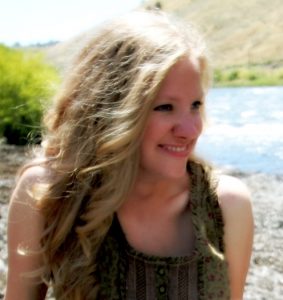